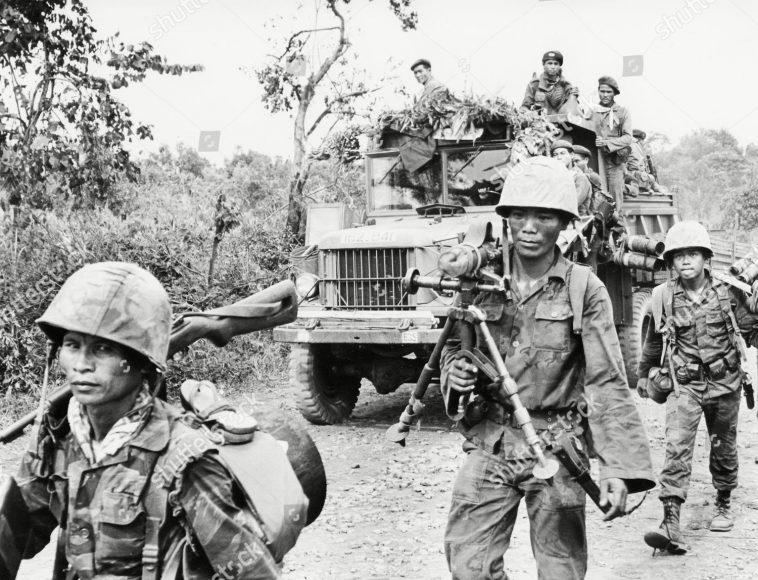 The Sino-Vietnamese War was a conflict between the States of Vietnam and China, but why did it happen?

When the west warns about the dangers of China, it is worth keeping something in mind, it has been 41 years since China was involved with a war with another country. It should also be kept in mind that this punitive and extremely short war was very much condoned by the USA and the west.

Prelude to the conflict between China and Vietnam

China and Vietnam had largely been allies during the Vietnam War. Ho Chi Minh had lived in China and the Peoples Republic supported the revolutionary line in South-East Asia.

As the Sino-Soviet split began to intensify it had drastic repercussions for the region. Unlike , which had managed to treat a thin line between the two major socialist powers, Vietnam very much entered the Soviet sphere of influence.

The Khmer Rouge and Democratic Kampuchea not only followed a very warped version of Maoism, but were also staunchly anti-Vietnamese. This turned the west, who were fearful of Soviet/Vietnamese expansion in the region into bedfellows of the Chinese as well as other non-socialist states in the region, such as Thailand.

The west, who could not outwardly support the Khmer Rouge did so instead through China.

See our article on did  for more details.

Democratic Kampuchea had asked for Chinese military support against the Vietnamese, something which was refused by the PRC, who instead recommended peace talks. The DR regime fell and was replaced by a pro-Soviet state propped up an occupying Vietnamese force. This was against the geo-political interests of both the USA and China.

Of course the Khmer Rouge were to flee to the mountainous borders of the country with US and Chinese military training and support until as late as 1991. The Khmer Rouge themselves were to last until 1998.

To read about the last Khmer Rouge state.

Why did China invade Vietnam?

It should not be forgotten that prior to the Sino-Soviet split the two countries had been extremely close red brothers. Chairman Mao looked up to Stalin as the leader of the Socialist Bloc, but all this was to change with the death of Uncle Joe.

We won’t go into the Sino-Soviet split too much, but whilst only tiny Albania sided with China, it also caused splits amongst communist parties and revolutionary groups across the globe. Those in favor of China being of the anti-revisionist camp.

In short the Soviets signed a treaty whereby they agreed (for 30 years) not to attack any ally of either country. Obviously there was slightly more to the treaty than this, but in the contexts of this war, the treaty ran out in February 1979…..

Following the conclusion of the treaty China was no longer bound by the terms of it and wanted to send a message to both the Soviets and more importantly the Vietnamese that their sponsor would be unable to protect them in a war against the Peoples Republic of China.

In January 1979 Chinese Paramount Leader Deng Xiaoping visited America for the first time. Of course no one knows exactly act was said, but one can assume what was to follow was given a green light from the US administration.

On February 15th 1979, a month after Democratic Kampuchea had been vanquished and the day that the Sino-Soviet treaty had lapsed China announced that they would be conducting a limited attack on Vietnam.

The official reasoning was to support ethnic-Chinese in Vietnam, who ironically were being treated a lot better than the Chinese, an in support of China’s ally the .

It is estimated that 200,000 Chinese troops invaded Vietnam, rather than the often touted 600,000. Ironically many of these troops had been deployed to help North Vietnam in its war with South Vietnam just a few years before.

The Vietnamese claim that their defense forces numbered only 70,000, which is despited by the Chinese. What is indisputable is that the Vietnamese forces had been battle hardened by the recent war with the United States. They certainly were not prepared to see Chinese  on their territory.

Soviet help during the Sino-Vietnamese War

The Soviets provided logistical support, such as airlifting a number of troops from Cambodia to northern Vietnam, but it was more their inaction that set the tone of events. Essentially due to fear that it would cause a direct war between the Soviet Union and the Peoples Republic of China the Soviets did not openly engage in the war, despite the treaty signed between Vietnam and the USSR in 1978. This massively highlighted the weaknesses of the Soviet alliance in South-East Asia, a primary reason for the Chinese invasion.

Fighting continued for around 3 weeks and consisted of Chinese attacks and Vietnamese counter-attacks. Following the Chinese claiming they had a “gateway to Hanoi” they withdrew on March 6th 1979.

Who won the Sino-Vietnamese war?

Like all of the “best” wars both sides claimed victory. From the Chinese point of view they had demonstrated the weaknesses of Soviet support. From the Vietnamese side they had (again) demonstrated that they were not a country easily colonized.

It is estimated that both sides had around 50,000 casualties each, as well as huge financial loses. Vietnam was also to purge a number of  perceived “hostile” or “pro-Chinese” elements in the country.

By 1999 China and Vietnam finally signed a permanent border treaty, and ironically you can now take the.

Physical fitness, also known as “health” or” fitness,” is a condition of body health and well being and, more importantly, the capacity to do various parts of ordinary tasks, such as activities of daily living (ADLs) and work. Physical fitness is typically achieved through regular physical activity, proper nutrition and adequate rest. A reasonable amount of sleep is also recommended. For more information on fitness, one can consult the American College of Sports Medicine (ACSM), which is a not-for-profit medical association that publishes the journal Sports Medicine. It provides support for physical therapists, athletes, and other persons involved in physical fitness.

ACSM defines an individual’s fitness level through a variety of factors, including: muscle strength, muscle power, functional ability, endurance, and body composition. These factors are calculated through a variety of tests that compare how different body parts respond to exercise. One of the keys to determining a person’s fitness level is determining the ratio of muscle strength to body fat. This ratio is called the RMR (rate of muscle loss) and is usually expressed as a percentage of body mass index (BMI).

The best way to determine one’s fitness level is to participate in some kind of regular physical activity and record how your body responded. One can also determine his or her fitness level by performing certain exercises and maintaining the proper form. One should also consider starting a fitness program when it is necessary to strengthen muscles and improve endurance. Fitness exercises that can be done at home include walking, bicycling, swimming, hiking, rowing, lifting weights, and working with resistance equipment such as weight machines, stretching machines, or free weights. Exercise balls, hand weights, and medicine balls can also be used to increase muscle strength and flexibility.

To get fit and remain fit, one should be willing to make changes to his or her lifestyle. A fit and active person does not eat too much or drink excessively. He or she eats a balanced diet and has moderate to consistent physical activity most days of the week. Participating in some kind of relaxation activity is important because it reduces stress levels, improves mood, increases energy, and lowers blood pressure. Regular aerobic exercise can help to reduce the risk of developing many serious illnesses such as diabetes, cancer, heart disease, and stroke. It has also been shown that people who regularly participate in aerobic exercise live longer than those who do not.

People who are fit have more mental peace and they are less likely to have mental health problems, such as depression, anxiety, fear of social interaction, or a lack of confidence. The ability to concentrate becomes better and people who are physically fit also enjoy their work more than those who are not. People who are fit also have higher energy levels and they are not as likely to get sick or have minor injuries. Being physically fit makes it easier to sleep better, which helps in reducing stress levels and may contribute to a decreased risk of insomnia.

Stretching is another important component of fitness and physical activity. Stretching helps by allowing more flexibility to the muscles and joints. Stretching decreases the risks of injury, such as muscle sprains, strains, tears, and injuries to tendons and ligaments in the lower body, as well as the spine. Many people believe that stretching decreases flexibility because it stretches out the muscle tissue in the outer layer of skin. However, stretching actually increases the flexibility of the innermost layer of muscle tissue, which is only 5% of the total muscle tissue.